Ninja or Samurai? Find out in Daimyo’s Fall Daimyo’s Fall is a deck-crafting game where players take on the roles of heroes in a land of a fallen Daimyo, or ruler. 2 to 5 players, ages 14 and up, can play a game in 60 minutes. Of course, familiarity with the game will make the game play faster.  Daimyo’s Fall comes to Kickstarter on May 9th, 2017.

The cards in Daimyo’s Fall are full of colorful and beautiful illustrations. There are hero cards, reinforcement cards, treasure cards (and a special type of treasure card, called Regalia), and lastly, Mon cards, which represent currency in the game

Hero cards have nine different pieces of information that is clearly identified. Although it may seem like a lot of information, you’ll learn them just after a few rounds of play. Heroes don’t cycle through your deck like a normal deck building game, another reason you will learn their abilities and rules quickly. In addition to the nice layout of information, you’ll notice that heroes have different frames. Ninja have purple frames and samurai have a red frame. Identifying the class enables players to see which treasure cards each hero may pick up and determines the reinforcement or treasure cards that a player can use.

Reinforcements are purchased to add to your deck. One unique feature of Daimyo’s Fall is the resell action. Each reinforcement card has a purchase cost as well as a value when sold. Mitsuki Sanada, above, is purchased for 10 Mon, but can be sold back for 5 Mon.

Treasure cards have two copies each and fall into two decks based on the samurai or ninja. To draw a treasure card, you must fulfill the loot condition of the active hero. Treasure cards work like reinforcements, but typically have a more powerful skill or bonus that heroes can use. Treasure is important because they give players victory points, which in turn, allow players to win the game. As mentioned above, there are some special treasure cards called Regalia and are difficult to acquire. The cost to draw one is high. However, players can also trade in treasures to draw a Regalia card. 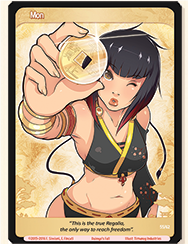 Mon cards allow players to purchase reinforcements or heroes. They generate 1 Mon when discarded to the discard pile. An interesting limit in the game is that you can’t have more Mon cards than what you start with.  As the game progresses, they aren’t as useful, so find a way to remove them if possible.

In Daimyo’s Fall, each player starts the game with the identical decks of cards. All the heroes are shuffled into a deck and one is randomly disbursed to each player.  You can purchase more heroes, but you cannot have more than three heroes.  As in normal deckbuilders, you shuffle your starting deck and place your hero card in front of you. It is never shuffled into your deck.

The Domain is the play area of Daimyo’s Fall and represents the palace of the missing Daimyo, the treasure, and the lotus tree at the top of the castle. Remember, once all petals fall from the lotus tree, the power of the daimyo is lost. Essentially, the loss of petals in Daimyo’s Fall represents a limit to the length of the game. Treasure cards, when played, release petals from the tree, so pay attention to the loss of petals throughout the game. There can be 40 or 50 petal tokens depending on the number of players.

There will be six face-down decks in the domain. You have a shuffled ninja reinforcement deck with 4 face-up cards available for purchase as well as a shuffled samurai reinforcements deck with four face-up cards available to purchase.  In addition, you’ll have a face-down hero deck, a ninja treasure deck, a samurai treasure deck, and a regalia deck. Besides the four ninja and samurai cards available for purchase, one hero card is drawn and placed face-up. This hero card forces a loss of petals based on the petal loss number displayed.  The domain is now set-up ready for play.

The game is played in rounds and a round is considered complete once every player has taken a turn. The oldest player gets to go first. Players, on their turns, play their Mon, reinforcement or hero cards to gain abilities and effects, to buy cards, or loot treasures. A turn has four phases. The Starting Phase has six actions that must be taken in order.

When choosing reinforcement or treasure cards, remember, only samurai can use samurai based cards and the same is true for ninja based reinforcements and treasures. If you have an active samurai hero, be sure to build a deck with a lot of samurai reinforcement cards.

The second phase of a player’s turn is the Main Phase. Players can take as many of the following actions as they wish, in any order. In this phase, a player can:

The third phase is the End Phase of the player’s turn. Not much happens at this point, but there are some effects that may activate at this point.

The last phase is the End of the Round phase. This is sort of a clean-up phase and the top card of the hero deck is revealed and is now able to be purchased. Don’t forget to remove petal tokens when you do so!  Also, the first player must choose two reinforcement cards and discard them and reveal two new reinforcement cards.  The first player token passes to the player on the left.

The end of the game occurs when the last petal token is removed. At this point, players count their victory points from reinforcements, treasure and hero cards. Ties are broken by the person who has the most treasure cards.

The second interesting interaction is dueling. Active heroes can duel other heroes. The attack and defense value of the heroes are based on their purchase and sell costs, respectively. Simply compare the attack value (purchase) value against the defender’s sell value, and the higher number wins. However, you can boost your value by discarding cards in your hand. So, you may discard cards and use the purchase cost as a boost to your attack or defense. Doing so means you may not have many cards in hand, but it may guarantee a win. Heroes will have a duel condition if they win or they may gain other bonuses. A hero that loses a duel must be turned inactive.

At first, there may seem to be large amounts of information on some of the cards. However, you don’t need all the information at once and you’ll learn what the icons mean rather quickly.  The text on the cards are also color coded- for example, we mentioned the colors associated with the samurai and ninja earlier. Text that matches a specific class is also color-coded for easy identification. In addition, words in bold print call out loot conditions so you always have a clear understanding of what must be done to gain those treasure cards.

The rulebook identifies some confusing interactions with cards and clarifies weird or strange situations. The examples are well thought out and identified in the rules. In addition, there is a summary of the gameplay, index of terms, a list of symbols and their meanings, and some clarifications.

If you like anime inspired games as well as deck building games, Daimyo’s Fall gives enough unique qualities that it’s a no brainer to back and support. Kickstarter is to help creators with new projects, and this is exactly that. A new project from Axis Mundo and their design team.

Will you choose samurai or ninja to claim the great daimyo’s treasure before the last petal on the lotus tree falls? Find out on May 9th on Kickstarter, play it on Tabletop Simulator through Steam, or download the print and play from the website.

Find Daimyo’s Fall can be found in the following locations: 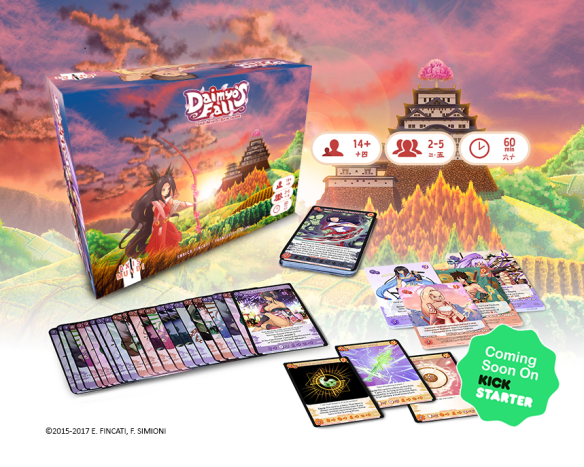